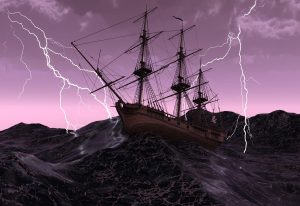 7 They all said to each other, “Come, let us cast lots, that we may know who is responsible for this evil that is on us.” So they cast lots, and the lot fell on Jonah. 8 Then they asked him, “Tell us, please, for whose cause this evil is on us. What is your occupation? Where do you come from? What is your country? Of what people are you?” 9 He said to them, “I am a Hebrew, and I fear Yahweh, the God[d] of heaven, who has made the sea and the dry land.” 10 Then were the men exceedingly afraid, and said to him, “What is this that you have done?” For the men knew that he was fleeing from the presence of Yahweh, because he had told them. 11 Then they said to him, “What shall we do to you, that the sea may be calm to us?” For the sea grew more and more stormy. 12 He said to them, “Take me up, and throw me into the sea. Then the sea will be calm for you; for I know that because of me this great storm is on you.” 13 Nevertheless the men rowed hard to get them back to the land; but they could not, for the sea grew more and more stormy against them. 14 Therefore they cried to Yahweh, and said, “We beg you, Yahweh, we beg you, don’t let us die for this man’s life, and don’t lay on us innocent blood; for you, Yahweh, have done as it pleased you.” 15 So they took up Jonah, and threw him into the sea; and the sea ceased its raging. 16 Then the men feared Yahweh exceedingly; and they offered a sacrifice to Yahweh, and made vows. 17 Yahweh prepared a great fish to swallow up Jonah, and Jonah was in the belly of the fish three days and three nights. Link to WEB.

Calvin, in his discussion of vs 4, considers that “innocent bystanders” suffered from the storm God sent to Jonah. And…I think it completely accurate to say that there are no “innocent bystanders”. Certainly, the sailors were not “innocent”. It seems apparent, from their reaction to Jonah’s revelation as to who his God is, that the sailors knew about Jehovah/Yahweh God. And, as we learn in vs 14, they prayed to Yahweh and not to their “own gods” for they now realize that Yahweh is supreme. Some comedy is built on pathos. And here we have a prime example.

In the movie, It’s A Wonderful Life the Jimmy Stewart character tries to commit suicide because he thinks things would be better if he had never been born. We’ve been there. The storm rages around us and we have no idea what we should do. We watch the movie and see the Jimmy Stewart character learn what the world would be like if he had never been born. In fact, we laugh at his futile attempts to communicate with people who should know him, but don’t, because he has never been born. We can’t help but laugh. The storm rages around Jimmy Stewart. But we see it as funny. We, in the audience, know something that the character does not know.

Think about it: the sailors are going to throw Jonah into the sea; knowing that it is, in essence, murder. They have the word of Jonah that it is the will of Yahweh that they do this deed. So, as they grab Jonah’s hands and feet and start swinging, they cry in anguish to Yahweh that HE would not hold this murderous act against them. I cannot help but laugh. It’s an uneasy laugh…but I do laugh.

Now we need to remember that this is not the first time Yahweh has asked someone to kill another. Consider Abraham and Isaac. God knows things that we do not. He was most definitely not asking the sailors to commit murder any more than He was asking Abraham to murder Isaac. In the sailor’s case, He was offering them life since it was His Will that Jonah be swallowed by the fish. To confirm that it was Yahweh’s will for them to toss Jonah overboard, the storm ceased the moment Jonah hit the water. –But do NOT confuse this with the claims of some murderers. Abraham was prevented from murder by an Angel. We are not told, but I suspect that the sailors would eventually learn that Jonah was preaching in Nineveh. Additionally, the sailors knew that Jonah was running away from Yahweh. They knew, from the evidence of the storm, that one way or another, Jonah was going into the sea. Do not think that God will ask you to commit murder. The Christian model is that we suffer martyrdom rather than commit murder. I have not read Dietrich Bonhoeffer, but I think he is probably a good resource for this. Suddenly, the scene is not funny anymore.

Well, actually, I think God produced a funny scene to help us deal with some very serious issues. Yahweh says to the sailors, in effect, “Obey me or drown”, and they do obey, in desperation. When it is over they offer a sacrifice to Yahweh…and they make vows. On the most simple level, it seems funny. However, God says “Obey me or die” to each of us. When we accept Jesus as our Savior we learn of the Grace and Love of God for each of us. So, when we read Jonah, we know that God’s Love and Grace and Mercy are being poured all over the sailors and Jonah. We truly understand the sailor’s fear. We have been there. We know the fear of Yahweh and also His Grace and Mercy. That’s what makes this humorous. We know that God has nothing but Good for both Jonah and the sailors. It is in knowing that God does only Good for us that we can face any storm. We might not understand, but we know.