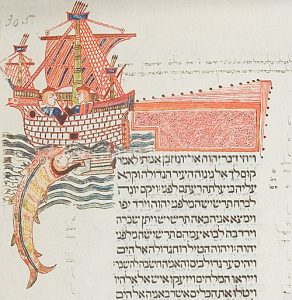 “Holy Spirit, as we study Jonah, soften our hearts to your will. Lord God, it is so difficult for us to listen to You, to hear You, and then to obey. Holy Spirit, we confess that we are so very much like Jonah.”

Image from Kennicott Bible thanks to  Wikipedia

3 But Jonah rose up to flee to Tarshish from the presence of Yahweh. He went down to Joppa, and found a ship going to Tarshish; so he paid its fare, and went down into it, to go with them to Tarshish from the presence of Yahweh. 4 But Yahweh sent out a great wind on the sea, and there was a mighty storm on the sea, so that the ship was likely to break up. 5 Then the mariners were afraid, and every man cried to his god. They threw the cargo that was in the ship into the sea to lighten the ship. But Jonah had gone down into the innermost parts of the ship, and he was laying down, and was fast asleep. 6 So the ship master came to him, and said to him, “What do you mean, sleeper? Arise, call on your God![b] Maybe your God[c] will notice us, so that we won’t perish.” Link to WEB *The notes [b] and [c] can be found at the end of the online text.

First, I’ll suggest what is to me an interesting “rabbit trail” if you have the time to pursue it: You might notice that the ASV uses “Jehovah” as the Name of God and the WEB uses “Yahweh” as His Name. See Exodus 3:14. The Geneva Bible note tells us to see Rev 1:8. Wikipedia has an article titled “I Am that I Am” If you don’t know about the Name of God, you could start with that article.

In the first study, Philippians, I used commentaries from Bible Gateway. There’s a lot more on the Internet. This second study will add John Calvin’s Commentary on Jonah. I found three good sources. First is Christian Classics Ethereal Library. The CCEL is a great resource, but it can be difficult to navigate. Calvin’s Commentaries | Monergism is a PDF format of Calvin’s book from the CCEL. It’s easier to navigate and it is an actual replica of the book. The third resource, StudyLight.org, is easy to navigate. But it contains some editorial comments that are not well marked and it’s in StudyLight’s format, not the original text format. Also, StudyLight provides the Hebrew words in Hebrew, which the Monergism text seems unable to reproduce.

As I noted above, the StudyLight text includes some editorial comments. One of them, concerning vs 3 quotes Matthew Henry Here’s the expanded quote:

He went to Joppa, a famous seaport in the land of Israel, in quest of a ship bound for Tarshish, and there he found one. Providence seemed to favour his design, and give him an opportunity to escape. We may be out of the way of duty and yet may meet with a favourable gale. The ready way is not always the right way. He found the ship just ready to weigh anchor perhaps, and to set sail for Tarshish, and so he lost no time. Or, perhaps, he went to Tarshish because he found the ship going thither; otherwise all places were alike to him.

I would say “Amen!” to Henry’s observation that “The ready way is not always the right way.” As Henry says, God may not block our way immediately. Most of us could testify to that. And I think we would add that He will see to it that His will is done. Thus the storm.

Some of us have had God toss a storm our way. It may, at the time, seem mean, petty, and totally unfair. And, if you tell Him that, He’ll probably smile or laugh and, in a kind and loving way, say, “Yeah, it sure looks that way, my child.” We have to remember, however, that God really does LOVE us. He wants His Best for us. We have to learn to trust God.

The storm does not bother Jonah. He’s below decks sleeping contentedly. This is somewhat a comedy scene. Here’s all the sailors running around topside in a horrid storm that causes them extreme fear. And Jonah is sleeping. I can just picture Charlie Chaplin or Steve Martin playing Jonah. The ship’s master misses Jonah and finally goes below decks to find him in bed!

It’s all about trusting God. This scene reminds me of Mark 4:35-41. Jesus is in the back of the boat, sleeping while a storm rages. The Disciples are extremely scared. Now, like the sailors in Jonah, they knew what to do in a storm. But this was no ordinary storm. When they wake him up, Jesus orders the weather to be calm and says, “Why are ye fearful, have ye not yet faith?”

There are several ways we can trust God. First is the best way, the way Jesus trusted God: completely. Jonah, sleeping below decks in the storm, also trusted God. But it was a rebellious, disobedient, erroneous trust. Jonah expected God to destroy him. The sailors also trusted God. Theirs was a misguided trust in a God they did not know. Witness the ship’s master who has faint hope that Jonah’s God will notice them. Little did he know that Jonah’s God not only noticed them, but was watching them intently. It seems to me that, had the ship’s master known how intently God was watching him and his ship, the master would have understood that there was something much bigger than the storm for him to fear.

Yeah, I’m making a play on the word ‘trust’. Few have truly trusted God the way David trusted him when he went down into the valley of death with five smooth stones to meet Goliath. Still, Jesus was amazed that his Disciples did not know how to say, “Peace, be still!” to the storm. And, I wonder, is Jesus amazed at us because we do not have the faith to say that, either?