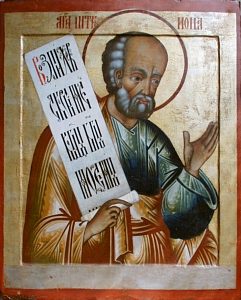 The story of Jonah is a fabulous tale. Children love it because it is funny. They like the happy ending for both the sailors and for Nineveh; also, the silly way Jonah acts. To see an adult throw a temper-tantrum can be hilarious. Many great comedians have produced some great comedy scenes with this scenario. Getting swallowed by a big fish is also rather funny—especially when you taste so bad it vomits you out. And the somewhat sarcastic tone of the story leads us to laugh. Everyone has acted like Jonah and everyone laughs, uneasily perhaps.

This is my second Bible study. The first was Philippians. I was greatly rewarded by that study, but it was sometimes very tough. I felt like I was not properly trained to do it. But that’s the whole point: this is a layman’s study. While I have read the Bible cover to cover a couple of times, I have never made the attempt to study it book by book. This is a lay person’s study. I am doing my best to listen to God and write what He wants said. Please don’t expect a professionally produced study here. It’s just a guy who loves the Lord writing down what he thinks about what he has read.

Some background on Jonah:

First, when did Jonah live? While we do not have his birthday, we can pretty much place Jonah in the “Northern Kingdom” of Israel during the reign of Jeroboam II. I’ll sometimes call it “Samaritan Israel” to distinguish that country from the whole of Israel (Northern and Southern Kingdoms or the country during Saul, David & Solomon’s reigns). In the back of my copy of The Jerusalem Bible there is a chronological table. It relates that “Assyria was weak” between 783BC and 745BC. Tiglath-Pileser III came to power in 745BC; making it silly to claim that Nineveh would be captured by its enemies after he came to power. 2Kings 14:25 mentions a prophet named Jonah in the discussion of the reign of Jeroboam II, who reigned in Samaritan Israel from 783BC to 743BC. Apparently, during his reign, Samaritan Israel was able to recover Damascus from Assyria. That would mean Israel was stronger than Assyria at that time. If so, then Nineveh might have had cause to worry. Then, researching chapter four, I found a reference that claims Nineveh suffered two plagues and a solar eclipse in the years between 765 BC and 759 BC. So we can put Jonah in this time frame. Certainly, this would help to explain why Assyria was a much weaker military power. See Answers.com at this link. Further research provided this essay by Tom Hobson. See chapter four for my thoughts.

In addition to Wikipedia and the chronological table in The Jerusalem Bible I found some details in Matthew Henry’s Commentary  and The Asbury Commentary on Bible Gateway.

Wikipedia has quite a bit to say about Jonah, some of it inspired, some of it silly. The sum of it is that Jonah strikes a chord with us. It is such a popular story that the Muslims have claimed Jonah for their religion. And, Wikipedia tells us, there are several sites claimed to be Jonah’s tomb.

In the discussions I have read, no one discusses the ability of the “great fish” to vomit. Quick Internet research provides an answer. If you really want to know the details, I found this gem about how sharks vomit. No wonder kids like the Jonah story! Ewwww…gross!

Okay. Everybody has acted like Jonah. We laugh, perhaps self-consciously, at the story. And when we read it, is seems that someone other than Jonah is telling the story. It seems to me that God tells this story from His viewpoint. That’s because of His Mercy and Grace. From Jonah’s viewpoint, God is a traitor to Israel. Jonah wants Ninevah to be destroyed. As a prophet, he is aware of what is going to happen to his home country if they don’t repent. He would like to stay in Samaritan Israel and work even harder to get his country to repent. Instead, he is sent to the enemy. It would be a very tough story from Jonah’s viewpoint. Instead, we get God’s viewpoint. Now you may not like this, but this is most likely how God views each of us. Really, I believe God laughs at us…frequently. However, it is a viewpoint that reveals God’s Mercy and God’s Grace. We get a story that’s fun and teaches us what we need to know about God. Plus, God’s laughter at Jonah is not mean, derisive laughter, it’s a compassionate laughter. God loves Jonah.

One final introductory comment: Wikipedia informs us that Joseph Campbell and others see similarities between the Gilgamesh and Jason stories and that of Jonah. And I agree, there are ‘similarities’ in these stories. There are also similarities between my trip to Scotland and your trip to Italy. I have read complaints about certain fantasy stories that are similar to The Lord of the Rings and the complainer thinks that these stories ‘borrow’ from LOTR. Well, no! Fantasy Adventure tales have some similar elements. In the Old Testament we have prophets who cure leprosy and raise the dead. I’m sure there are complaints about these stories, also. The truth of Jonah is that God can do what He sees fit. The evidence I have found suggests that Assyria was a weak country during Jonah’s time. Samaritan Israel was a strong country in rebellion against God. Jonah was one of God’s prophets. And Jonah tells us that he knew what would happen if he preached in Ninevah. This is not a fantasy tale or allegory. It really happened.

Wikipedia does provide Jewish tradition about just who Jonah was. If Jewish tradition is correct, then we have more to contend with than a ‘giant fish’. Apparently, Jonah was raised from the dead, by either Elijah or Elisha. That bit of the story really makes Jesus reference to Jonah much more interesting.

Before we dive into Chapter One, let’s take a look at a map provided by Wikipedia: 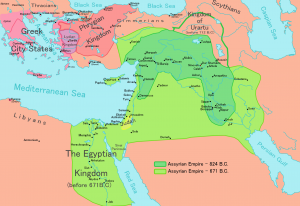 In 2nd Kings we are told that Jeroboam II retook Damascus from the Assyrians. If you start at Damascus and go NorthEast crossing the Euphrates to the Tigris River, Nineveh is just north of Calah. Judah is the yellow bit. Jerusalem is in Judah. Samaria is north of Jerusalem. I hope this map helps.