“Heavenly Father, thank you for including this short but complicated story in Your Holy Scripture. Please open our minds to Your Truth and bar anything else.”

4 But it displeased Jonah exceedingly, and he became angry. 2 So he prayed to the Lord, and said, “Ah, Lord, was not this what I said when I was still in my country? Therefore I fled previously to Tarshish; for I know that You are a gracious and merciful God, slow to anger and abundant in lovingkindness, One who relents from doing harm. 3 Therefore now, O Lord, please take my life from me, for it is better for me to die than to live!” 4 Then the Lord said, “Is it right for you to be angry?” 5 So Jonah went out of the city and sat on the east side of the city. There he made himself a shelter and sat under it in the shade, till he might see what would become of the city. 6 And the Lord God prepared a [a]plant and made it come up over Jonah, that it might be shade for his head to deliver him from his misery. So Jonah [b]was very grateful for the plant. 7 But as morning dawned the next day God prepared a worm, and it so damaged the plant that it withered. 8 And it happened, when the sun arose, that God prepared a vehement east wind; and the sun beat on Jonah’s head, so that he grew faint. Then he wished death for himself, and said, “It is better for me to die than to live.” 9 Then God said to Jonah, “Is it right for you to be angry about the plant?”And he said, “It is right for me to be angry, even to death!” 10 But the Lord said, “You have had pity on the plant for which you have not labored, nor made it grow, which [c]came up in a night and perished in a night. 11 And should I not pity Nineveh, that great city, in which are more than one hundred and twenty thousand persons who cannot discern between their right hand and their left—and much livestock?” Link to NKJV

First, you may note that I posted the NKJV text, following their copyright rules. This study has been difficult. There are differing opinions about Jonah’s reasons for being angry. Most were, it seems to me, incomplete. As I wrote Part Two I discovered that I needed to go back to Part One and edit/rewrite some of it. But I think the Holy Spirit has provided some small understanding. I hope you find what’s written here worthwhile.

I tried to find the Jerome passage that is the subject of Calvin’s comments on verse 1 of chapter 4. Unfortunately, I’m not a classical scholar and I could not find it. Hopefully, one of you, my readers, will know where to find it. Please tell us in a comment.

Well, as I read John Calvin’s thoughts, I wonder how much of his (and Jerome’s … and even my ) comments reflect on them (and me) more than on Jonah. Calvin thinks Jonah is worried about being thought a “false or lying prophet” and thus he seems, to us, a very petty man. The Asbury Bible Commentary does have something interesting to contribute. It discusses the idea that Jonah was very selfish, angry about Nineveh being saved by his preaching and by the destruction of the vine. The Asbury Commentary suggests that Jonah should have remained in Nineveh, teaching the people about God.

Well, Jonah’s prophecy was, eventually, fulfilled. In 612 BC a siege was successful and Nineveh was destroyed. That’s not exactly forty days. But then, as I mentioned earlier, ‘forty days’ was, most likely, not ever exactly forty days. (The prophet Nahum also predicts the fall of Nineveh. He was about a century later—maybe forty days before the siege?)

I really wanted this to be a confirmation of what Calvin suggested. Verse 3 does seem to suggest that Jonah was more concerned about his prophecy being unfulfilled. And then I found a note I had written in my Bible: it dated Jonah at 722 BC. That’s the date Assyria conquered Samaritan Israel. So… What if Jonah were fleeing not just God sending him to Nineveh, but the Assyrians seeking to deport him to Gozan? That puts a much different spin on Jonah’s anger. It also gives a possible reason for him to leave Israel. Most of us just tell God “No” and continue with our lives.

Holy Scripture frequently refers to all of Israel as a “vine” or other plant. Even Jesus tells the story of a vineyard and the Pharisees recognize that He is talking about them. See Luke 20:9-19. I mention this to show that God is using the vine to make a point.

As I have said, I am not a theological scholar. I am just reading scripture, looking at some commentaries and then writing down what I think, in the hope of inspiring you. Now, I have been told that we should interpret the Bible with the Bible. So, when I look at the Bible, I note that many prophets, including Hosea, who was preaching about the same time, use their lives as an illustration to the people. So, what sort of illustration does Jonah provide? 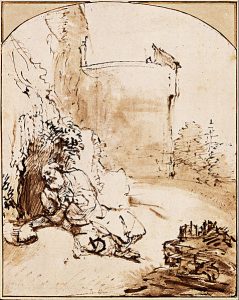 Rembrandt Harmenszoon van Rijn – The Prophet Jonah before the Walls of Nineveh, c. 1655

Well, I think the vine—or gourd—or whatever plant suits your fancy—is a symbol of Israel. Thus, when the vine was providing shade to Jonah, he was a happy man. But when the vine was destroyed he was bitterly angry. And then God tells Jonah that He, the Creator, has concern for all of His creation. So, Jonah has published his story for us to understand that God is not limited to Israel. He is the God of all. And that withered, shriveled vine? That’s Israel.

So, if we were to consider that Jonah was preaching in Nineveh after the fall and deportation of Samaritan Israel, we might understand that Jonah saw the deportation as one way God would force him to go to Nineveh. Of course, this, like most of the commentaries, is opinion & speculation.

But imagine that Assyria has just conquered Israel. The Israelites must have told their captors about how God had said that, if they would not worship the “God of Heaven” then God would turn them over to their enemies. Then, in 722BC, the Ninevites would still remember the plagues and the eclipse. And God tells Jonah that they don’t know their right hand from their left (spiritually speaking). So, I can understand that Nineveh would be willing to repent when Jonah starts preaching.

And I can understand that Jonah would be furious that God would destroy his homeland and then save the enemy. And it clarifies God’s purpose in the use of the vine. If the vine represents Israel to Jonah (and to us) then we begin to understand, to some degree.

Now none of the commentaries I read actually suggest that Jonah was preaching in Nineveh in 722. But I did get some inspiration from The Asbury Commentary and F. B. Meyer’s Through the Bible Commentary, as well as John Calvin. And I decided to add it to this essay in hopes that it will inspire you. Not that it is “correct” but that it “could be”. It actually does not matter when Jonah preached in Nineveh. Jonah was a prophet and I’m fairly certain he was preaching in Israel the same message that Amos and Hosea were preaching. It does not matter if the story is “literally” true (I think it must be…Jonah would not make this up) or an “allegory” to illustrate a point…or both. What matters is that we make the attempt to understand the Spiritual Truth God is revealing to us through his prophet.

There are, from my viewpoint, several things here. One is that God really was preparing the world for Jesus. Two is that God wanted everyone, not just Israel, to worship Him. Three is that Israel, time and time again, chose to worship other gods. Four is that even a pagan city like Nineveh is more willing than Israel to listen to God. Five is that, just as Jonah had nothing to do with the vine, so Jonah had nothing to do with Israel. Six is that we sometimes get our patriotism and our religion confused.

Seven is quite different. We have not discussed it, but Calvin comments on verse 2, quite bothered that Jonah would pray to God is such a manner. However, if you look at the Psalms, you’ll see that God does get questioned accusingly. It is my understanding of our Lord that He would much prefer us to rant and rave in anger at Him rather than to rant and rave about Him to others. By this I mean that it is quite acceptable to tell God all about why you are angry at Him. But do so in prayer, just as Jonah did. And then listen to God. Do not do as Israel did. Do not do as the Pharisees did. Instead, follow the example of the Gentiles who heard Jonah and Peter and Paul preach the truth and repented.

Finally, in spite of the repentance brought on by Jonah’s preaching, Nineveh was destroyed. But why? Well, Jonah did not stick around, leading the people in spiritual understanding. In fact, they had only their old, false priests to instruct them. The last verse, 4:11 informs Jonah that God does care about the Gentiles. In fact He cares about His entire creation; He mentions the livestock to Jonah.

In 722 BC, Shalmaneser V conquered Samaria. He carried the people to Halah on the Habor the river of Gozan. See 2 Kings 18:11. You can find it on the map in the introduction. It’s about halfway between Israel and Nineveh. Note that Haran, the place where Abraham’s father, Terah, lived, is not far from Gozan.

However, even though Jonah does not say it, God does bring Judgment on those who deny Him. Now if you check Genesis 18:22, you’ll see that God told Abraham that Sodom would not be destroyed if there were 10 righteous men in the city. And God promised destruction to Israel if they would not worship Him.

Sobering thoughts for a story that starts out to be quite funny.

So, Jonah is not a funny story about a guy getting swallowed by a fish. Instead, it’s about Israel’s stubborn refusal to worship God and Nineveh’s quick repentance. But ultimately, it’s about God’s desire for Gentiles to learn about Him.

The next study will be something completely different. It follows, historically, the deportation of Israel. It sheds light on the circumstances of those in exile. It is a very nice tale, with the sort of ending we like: the good guys win. I think it will be fun.