“Holy Spirit, the more we study Jonah, the more we see that’s it’s really not about a fish. It’s about You. As we study chapter four, help us to see that You are in control.”

4 But it displeased Jonah exceedingly, and he was angry. 2 He prayed to Yahweh, and said, “Please, Yahweh, wasn’t this what I said when I was still in my own country? Therefore I hurried to flee to Tarshish, for I knew that you are a gracious God, and merciful, slow to anger, and abundant in loving kindness, and you relent of doing harm. 3 Therefore now, Yahweh, take, I beg you, my life from me; for it is better for me to die than to live.” 4 Yahweh said, “Is it right for you to be angry?” 5 Then Jonah went out of the city, and sat on the east side of the city, and there made himself a booth, and sat under it in the shade, until he might see what would become of the city. 6 Yahweh God prepared a vine, and made it to come up over Jonah, that it might be a shade over his head, to deliver him from his discomfort. So Jonah was exceedingly glad because of the vine. 7 But God prepared a worm at dawn the next day, and it chewed on the vine, so that it withered. 8 When the sun arose, God prepared a sultry east wind; and the sun beat on Jonah’s head, so that he fainted, and requested for himself that he might die, and said, “It is better for me to die than to live.” 9 God said to Jonah, “Is it right for you to be angry about the vine?” He said, “I am right to be angry, even to death.” 10 Yahweh said, “You have been concerned for the vine, for which you have not labored, neither made it grow; which came up in a night, and perished in a night. 11 Shouldn’t I be concerned for Nineveh, that great city, in which are more than one hundred twenty thousand persons who can’t discern between their right hand and their left hand; and also much livestock?” LINK to WEB

One purpose of all this is to inspire you, my reader. I am asking you to think about what Scripture says, in prayer and meditation. But it’s also my effort to study Scripture for myself.

I honestly do not know where these studies are going. I read the Scripture and ask the Holy Spirit to guide me to the commentaries He wants me to read. I ask Him to show me what I should use for research and what to write. And…I rewrite these studies until I think I have gotten it the way He wants it. Just, please, understand that I’m a layman, not an ordained, trained theologian or historian.

The first three chapters of Jonah are a sort of explanation of the circumstances that produce the events of chapter four. They have been fairly straightforward, and sometimes funny. But now we have some serious business. There’s much we need to understand.

Calvin disagrees with St. Jerome in the assessment of Jonah’s grief and anger at God. It seems to me that all of this is about Israel. We know that Jonah was a successful prophet in Israel. See 2nd Kings 14:23-29, A very careful reading of the 2nd Kings passage will show that God used Jonah to assist Jeroboam II in the war with Assyria. From what I can determine, the prophets Amos and Hosea were also preaching during the reign of Jeroboam II. Jonah most likely came before them. 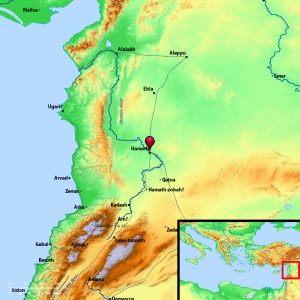 As you read the 2nd Kings passage, you’ll note that Jonah was instrumental in the capture of Damascus. Hamath was in the ‘far north’  and the Sea of Arabah, which we now call The Dead Sea, is in the south. So, Jeroboam II, with God’s assistance, through Jonah and in other ways, restored the borders of Israel to the borders defined in Numbers, Joshua, and Ezekiel. On the map, if you locate Sidon on the coast then go East, you’ll find Damascus on the very bottom edge of the map. You’ll also find Hamath on the map that I posted in the Introduction to Jonah.

One more bit of ‘old business’ before we go forward. In the introduction I noted that Nineveh suffered from two plagues and witnessed an eclipse of the sun within a short period. I won’t bother you with references, but, in case you were wondering, the Babylonians did work out the cycle of solar and lunar eclipses. The Assyrians had not the science to do this. So, not understanding, they may have considered the eclipse to be a bad omen.

Now we can get back to chapter four. Jonah had, apparently, made a name for himself in Samaritan Israel. And the Assyrians were Israel’s worst enemies. Now, in verse 2 of chapter 4 we learn the real reason Jonah fled from God. He did not want the enemies of Israel to prosper. He wanted Nineveh to be destroyed. I’ve heard a preacher on the radio claim that Jonah was a racist. I don’t think that was it. Instead, I think he was a very zealous patriot.

He also knew that his countrymen were not faithful to God. Jeroboam I had created a new center of worship—and a new religion, based, in part, on golden calves—when he rebelled against Rehoboam. The Caananite god, Baal, and others were also worshiped. The North, which assumed the name “Israel”, never did return to worship Yahweh/Jehovah.

It is my personal opinion that God was giving “Samaritan Israel” a way out. Through plague and a solar eclipse the people of Assyria & especially Nineveh were demoralized. Jonah had told Jeroboam II that God was helping Israel. His army recaptured the original borders. Things were, as they say, looking up. But Israel was not willing to return to the worship of the one true God (Yahweh/Jehovah). So, when God told Jonah to to to Nineveh, Jonah understood everything. He knew what was going to happen. And he fled. It was better that he drown in the sea than he preach a revival in Nineveh and restore the enemy of Israel.

But God sent a big fish. (Somewhere I read/heard the idea that Jonah tasted bad. It does add to the humor.) And Jonah tasted so bad that the fish vomited him onto the shore. Again, this is my opinion. The plagues and the eclipse were completed. The people were demoralized. And Jonah strolls in with his message of doom. But…he uses the words God gives him. And the people repent. Israel had seen Elijah order a drought and then watched as God lit a fire on Mount Carmel. They had witnessed the great miracles of Elisha. And yet they refused to listen. We do not know what happened to Jonah. But Amos and Hosea followed him. And still the people would not listen. But Nineveh did listen. And God postponed their destruction. 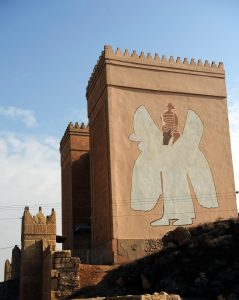 A provincial reconstruction team and representatives of the United Nations Educational, Scientific, and Cultural Organization visit what remains of Nergal gate in Nineveh, Iraq, Nov. 22, 2008. Nineveh, built between 704-681 B.C., was a capital of the Assyrian Empire and was surrounded by a 12-kilometer mud brick wall. (U.S. Air Force photo by Staff Sgt. JoAnn S. Makinano/Released)

There is much here that can be debated. Why did God do this or that. Well, in your debating, remember that God was preparing Nebuchadnezzar and Cyrus and Alexander the Great and Augustus Caesar. And he is working in the world today.

Jonah knew that if he went to Nineveh and preached, they would repent and Nineveh would not be “overthrown” in forty days. What Jonah did not understand was that God was preparing the way for Jesus.

But there’s much more here. Perhaps Calvin is correct, and Jonah is throwing a tantrum over the fact that he looks like a false prophet. We will look at this in Part Two.